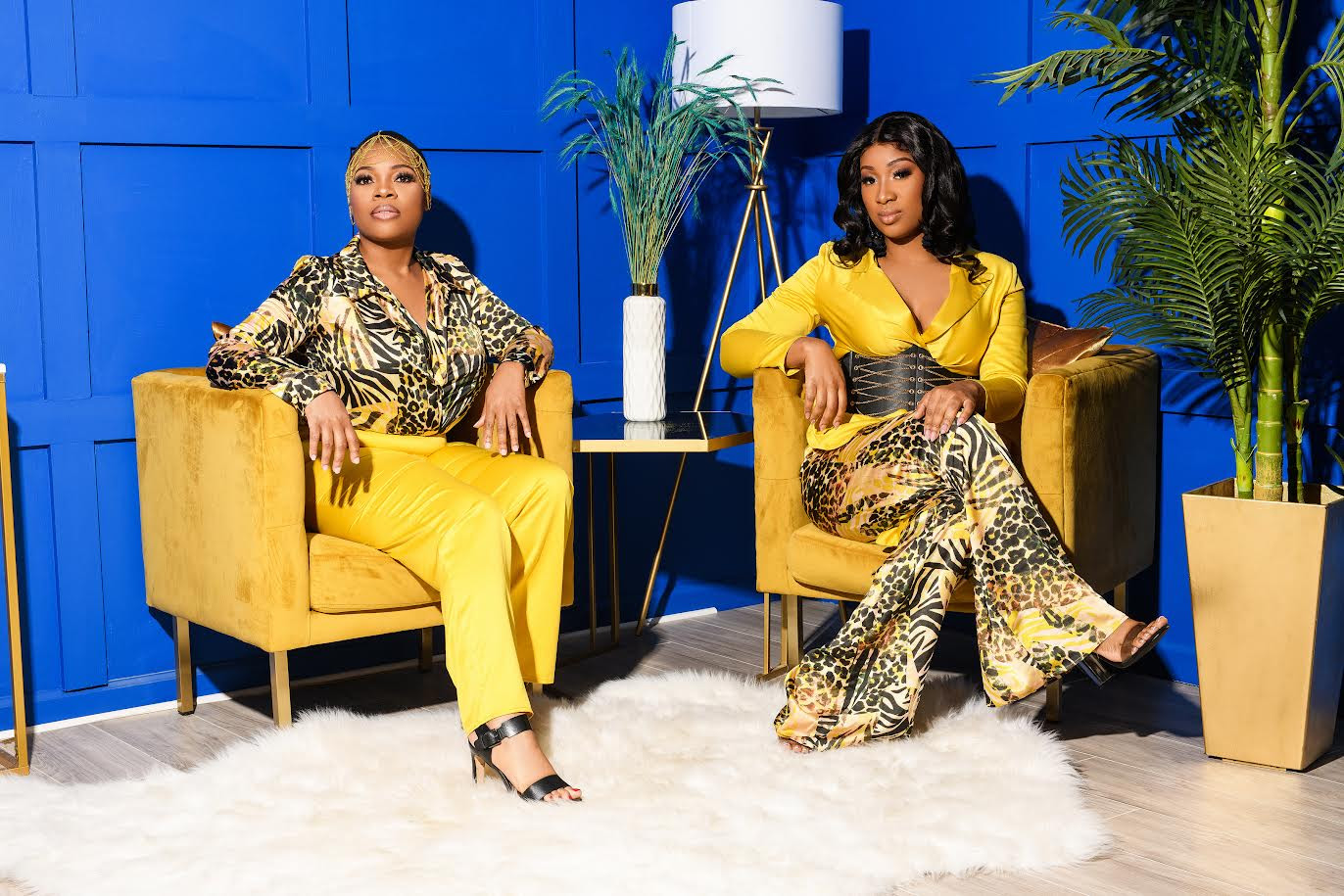 To have hope means to have a feeling of expectation and desire for a certain thing to happen. In this series, we are highlighting women who possessed hope and trust that the desires of their hearts would happen.

Andrea Sykes is the founder of Abundance BTS (Business and Tax Services), a company based in Stone Mountain, GA that promotes personal development, wealth building, and health and wellness.

Sykes, a native of Brooklyn, NY by way of Haiti, was born to Haitian and Dominican immigrants and experienced a life that can only be described in one way – tumultuous. As a toddler, she traveled back and forth from the U.S. to Haiti, as her mother searched for a better life in the U.S.

By age four, Sykes was taken away to live in the Dominican Republic with a father she had never met, not knowing any Spanish. Her first memory of him is “receiving the beating of her life” when she cried for having to go with him. She was routinely abused, belittled, and told she would never amount to anything for years. No one ever really accepted her, not even her other siblings.

“Growing up I had a big identity issue. I had no idea who I was,” Sykes said. “I struggled with identity from early on. I didn’t know where I belonged. Everywhere I was, I was an afterthought.”

By the time she was in 4th grade, her mother had finally arranged for her, along with her father and two sisters to move to the United States. While one might think that the family being under one roof in “the land of opportunity” would make things better, it did not. The family dysfunction continued. Sykes’ mother took on multiple jobs, and the children often had to fend for themselves in a house of terror.

The result was years of Sykes struggling to communicate in the English language, abuse at the hands of her father, and the lack of outside acceptance. The circumstances would lead to her considering suicide at age nine, becoming a teenage mother, having her first of three children by age 17, enduring abusive relationships, and even serving time in jail. The trials and tribulations continued to mount, and there was even a time when she had to fight to get her daughter back after her ex sent the child back to Haiti.

However, despite the avalanche of trials and tribulations, Sykes possessed a warrior’s spirit. There was always a feeling inside of her that she was special. She believed that she would one day create an extraordinary life for her children, where they would thrive.

“I had been struggling for years and had felt that I wasn’t really smart enough to do anything, but I always knew that entrepreneurship was my way out. There was something inside of me, and I had great ambitions, even though my family always told me I would not amount to anything,” she said.

Sykes began studying the Bible extensively, in addition to learning about finances and entrepreneurship. She became especially intrigued with businessman and author Robert Kyosaki.

“I started reading his book “Rich Dad, Poor Dad,” and I identified with him when he said he was just a C student and couldn’t pass his English classes,” she said. “It showed me that just because you were not exceptional at one point in your life, it doesn’t define your ability to be very successful in your future.”

In 2008, Sykes went to school and became a certified financial educator with the National Financial Educators Council, and also earned her degree after finishing her studies at the Metropolitan College of New York in 2012. Nearly a decade later, she reunited with Nadine Pierre, who she refers to as her “sister from another mother”. Always fond of one another, the two of them decided to partner in business together. Pierre, like Sykes, had endured a dysfunctional marriage and adversity of her own. Their shared experiences further solidified their bond, and Abundance BTS was born.

Abundance BTS aims to show people that they can have it all. A physically, spiritually, and financially abundant life, if they adopt the right mindset, and educate themselves on key success principles. Through the company, Sykes, Pierre, and their third partner, Emmanuel Saintil, provide success training, products for health and wellness, tax preparation, and life insurance, and also help aspiring business owners to properly structure their businesses and acquire funding.

What Inspired your start in entrepreneurship?
In 2006 I was attending Molloy College in Rockville Center, NY with a major in Biology. That year was especially challenging for me, as all my family had relocated to Georgia the previous year. Katherine my 1st child was in 2nd grade and Samuel my 2nd child was about 17 months old (who early on was always getting sick). It was extremely tough for me trying to go to school and work full time as a Home Health Aide. Do I need to tell you that I was struggling in every area!? I was failing school and couldn’t pass my favorite class, which was Biology 126.

One day during one of my lab classes, I noticed one of my classmates was missing a lot of our classes. I approached her to find out if she was okay… to my surprise she was struggling a little bit like I was and barely staying above water. Our professor told her that she was going to fail the class because she was too far behind to make up the work. I told her I would help her because in talking to her, I figured out where she was stuck. After one afternoon of tutoring her, she was able to complete everything else with a snap of the finger. Two weeks later she told me “Girl… I got an 89% on our midterm, you have like a 100%, and if it wasn’t for you, I wouldn’t make it.” She was the only person I opened up to about my issues. I told her I had to leave the program because I just couldn’t connect the dots at the moment. We both cried together because she couldn’t understand how I was able to carry her and not myself.

But that day she told me the way her circumstances were, she couldn’t work for anyone, it wouldn’t make sense for her schedule. “What do you do then”? I asked her. She said that she had a part-time cleaning service and told me that I could probably do the same thing. She was making $350 to $700 on the weekends and that is what I was making in an entire week. She advised me to take a semester off, regroup to set up a cleaning service, and come back. She planted a seed that day. This was in 2006. I don’t even remember her name, but she inspired me to venture into entrepreneurship.

What obstacles have you had to overcome to get where you are today?

One of the biggest obstacles I’ve had to overcome is my fear of people. Don’t get me wrong… I’m always ready to lend a helping hand to anyone who needs it. I just did not know how to receive a hand or recognize someone who was ready and willing to help me. My past trauma did not help either. Eventually, I learned that two is better than one, and if two or three work together, anything is possible. I’ve embraced the wisdom of knowing that my favor, my blessings, and my money are all connected to people… I realized that I am just one connection away from getting to my desired destination! So, I embrace learning how to build relationships. G-d is in the people business so who am I to be in any other business; I follow my Master! I am becoming a friend-making machine.

What message of hope do you have for upcoming entrepreneurs?

My message of hope comes from my mom; she always reassures me that if G-d gives you a vision, He will also give you all the resources you need to fulfill it. Just stay connected to your Spirit and It will guide you! I am one who strongly believes that whatever I envision I can have, no doubt about it. Not if, but when; it’s only a matter of time (I always tell myself). I also believe that for other people too. Anything you WANT; you CAN have it! You just have to want it bad enough!

What are your top 3 go-to songs for motivation to keep going after your goals?

Wow, this is tough. Anyone who knows me knows I love music… Just three. Lol. Okay. I would say at this current moment, my three are:
1- You Gotta Be (Des’ree)
2- Be Still (Travis Greene)
3- Open Heaven (Maranda Curtis).
May I add a bonus: The Champion (Carrie Underwood)

What is your definition of a pretty woman who hustles?
Someone once told me “You wear it all well”! She was astonished at all the things that she had heard I had experienced. Imagine if she knew everything. Talk about problems after problems, trauma on top of trauma – from abuse to abandonment….And here I am still kicking and pushing!

To me, a pretty woman who hustles is a woman who’s not afraid to get down and dirty. Then she gets up, kicks the dust off of her shoes, takes a great shower, combs that hair, puts some perfume on, and rocks out! Things don’t always look pretty, but that does not stop us. Pretty women who hustle truly know the art of balance!

Connect with Abundance BTS (Business and Tax Services) by visiting them online at www.abundancebts.com

Summer looks on the GO…