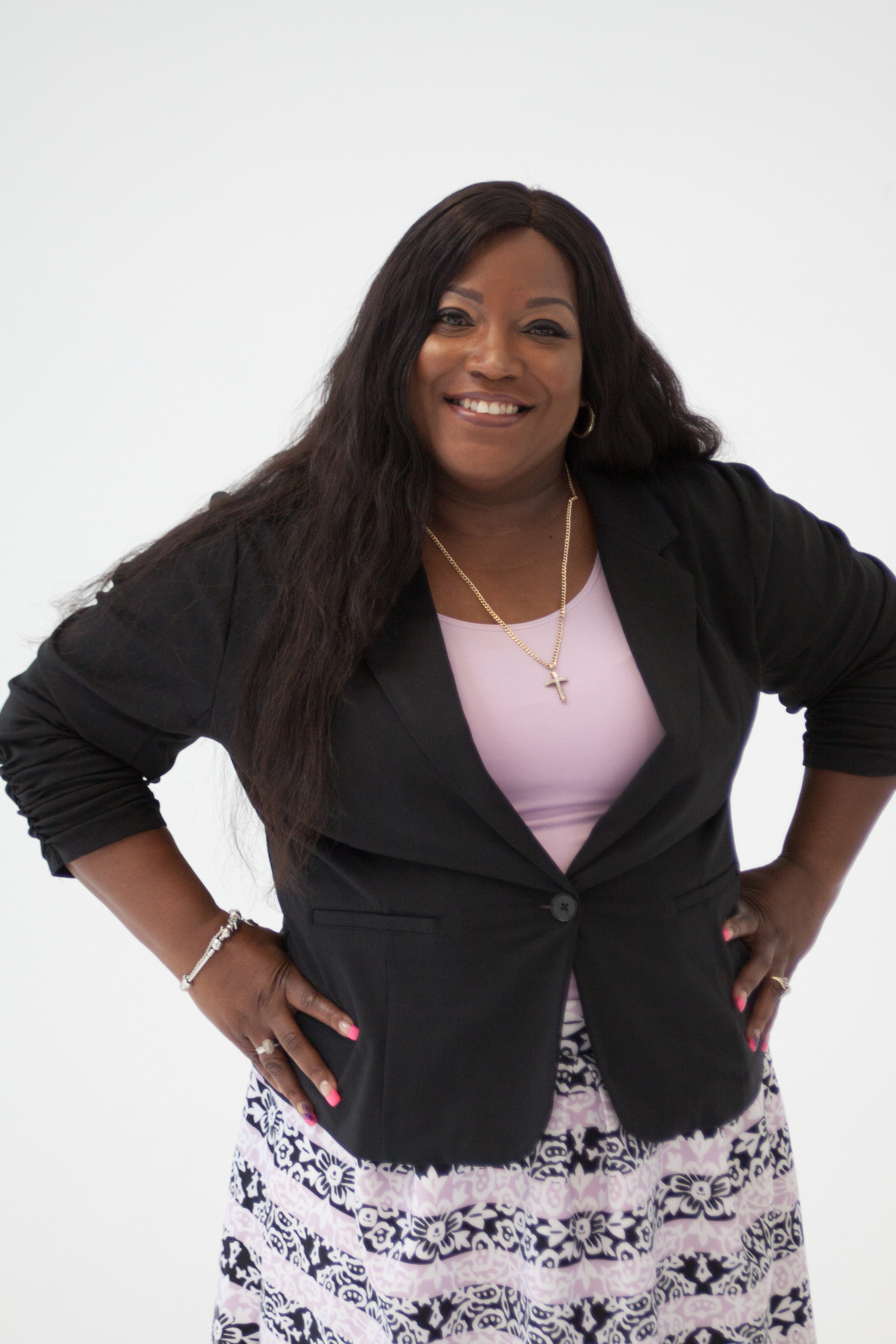 Elder Yolanda “Monique” Coleman was born May 26, 1970, in South Jamaica Queens, New York. She is married to Elder Jerome Coleman of twenty-two years. She is a mother of a “blended” family which consists of eight adult children and twelve grandchildren combined.

Elder Yolanda Coleman is the only child born to her mother, Cheryl Pinkney-Jones. She graduated from Satellite Academy High School in June 1989 and her first child was born three days after graduation. She graduated in 2006 from John Tyler Community College with her Associates in Human Services: Substance Abuse.

She later graduated in 2013 from Liberty University with her bachelor’s degree in Psychology: Christian Counseling. In 2015, her studies led her to South University under their Doctorates in Ministry program where she is currently attending. She took biblical training classes in Evangelism and received a certificate of completion and her Evangelism license from St. Paul’s Church of Christ Disciples of Christ, Bronx NY in 1999. She attended Mason Kelly Washington Religious Training Institute where she successfully completed Chaplains Ecosystems and received a Para Chaplain badge in 2001. Where she and her husband ministered the Word of God in the prisons of New York City.

Elder Yolanda Coleman has been saved and serving the Lord for over twenty-four years. She was told by her former Pastor back in 1998 that, “God has something special for you to do!” She didn’t have any idea how this was going to happen or when it would happen. God continued to tug on her heart and eventually, Elder Yolanda Coleman surrendered to the call on her life and to do the Will of her Heavenly Father. She was ordained as a Minister in 2015 and in October 2017, she was ordained to the office of Elder by Apostle John Gray of Life Touch Ministries, Williamsburg, VA. She is a faithful member and currently serves at Restoration Assemblies Church RVA under the leadership of Pastor Steven M. Hawley, Jr. She is one of the Senior Administrator Leaders, she teaches Christian Education and serves on the Outreach Ministry Team. She solely believes the Bible is the engrafted Word of God, inspired by the Holy Spirit & contains every answer to people’s problems. “It is The Lord’s will for us to reach out to all those who are poor, oppressed, widowed, brokenhearted, and orphaned.” By using the “Word of God” and the “Love of God!” She proclaims the gospel verbally, no matter how intriguing a person’s lifestyle might be.

Elder Yolanda Coleman is the CEO and Founder of F.A.I.T.H. (Families Attaining Integrity Thru Hope) Mentoring Program, Hearts Desire Wedding Officiant, and holds public office as a Notary Public for the Commonwealth of Virginia. Elder Yolanda Coleman and her husband Minister Jerome Coleman both hosted an Internet radio talk show called L.I.F.E. (Living in Freedom every day) Broadcast Ministries. Elder Yolanda Coleman is a published author and released her first book in April 2019 called, “From Broken to Reborn!”

She has over nineteen years of experience working in the Human Service field which include substance and alcohol abuse and mental health. With all of Elder Yolanda Coleman’s skills, ability, and life experience. She is committed to mentoring at-risk youth, teens, and young adults who struggle with addiction, mental health disorders, domestic violence, and who is the transition from the Criminal Justice back into their communities. Elder Yolanda Coleman’s prayer is that someone’s life would be healed, delivered, and set free. Elder Yolanda Coleman believes in her motto, “Be Stronger Than Your Excuses!”

If you would have asked me this a few years ago, I probably would have a different response.

PWH: How do you balance the demand of Ministry, Author, Coach, and Entrepreneur?

YC: I have to set healthy boundaries, prioritize, and knew my limitations, not taking on more than I could chew. I’ve learned my lesson from my past experience with burn out. Which entailed working a full-time job, attend college(working on Doctorates), fulfilling ministry assignments, and supporting a Mom who was ill at the time and a child with mental health disorders. It was a lot on me. When I became ill myself, it put a lot of things in perspective and I had to learn that being busy doesn’t mean being productive.

PWH: At what moment did you realize you had a calling on your life?

YC: Honestly, after I nearly overdose on drugs. I had a flashback of my childhood and seen how God’s hand of protection was over me. After I said, “Yes” to His will, I knew He had called me to the ministry of reconciliation and evangelism. I enjoy outreach ministry the most just because of where I came from. I know first hand how it is when someone can’t relate to the things a person is going through. I’m grateful for the experience.

PWH: What does self-care and devotional time look like for you?

YC: Self-care means different things for different people. My self-care could consist of doing nothing at all to binge-watch a television program, read(books & Bible), listening to music(good ole Gospel), take a relaxing bath, sleep, or just take a 15-minute time-out from everything(peace & quiet). As I stated in the previous question, I’ve learned my lesson of burn out. I don’t want to burn out again. It depleted me, physically, mentally & spiritually. I’m comfortable with saying, “No” and not feel guilty about it.

YC: Families Attaining Integrity Thru Hope (F.A.I.T.H.) Mentoring Services is a 501c3 nonprofit organization that was founded in 2013.  I had just graduated from college getting my Bachelors degree. I had a turning point in my career.  Yes, I went back to school when I was 42 years old & graduated. You’re never too old. My focus were to assist youth, teens and young adults with mental health disorders, childhood traumas, substance abuse, legal issues and vocational so they could live a productive & healthy lifestyle

Living In Freedom Everyday(L.I.F.E.) talk show began in 2017. My husband JColeman who is my cohost had given the name “L.I.F.E.” once we were accepted to begin our show on Legacy Internet Radio, December 2017.  The name no longer became a talk show for us but a Ministry. As we continued to embrace the name “L.I.F.E.” We decided to brand it as part of our ministry and what we do. Recently, maybe a year ago, we decided to make the name stand out as part of our ministry assignment. Which is now called “L.I.F.E. Outreach Ministries”

PWH: What inspired the title of your book, “From Broken to Reborn?”

YC: When I began to write the first book, I actually had a different name. It was called, “My Story, His Glory!” One day I was discussing my book with a particular family member. It was funny how she interrupted me and said, “God told her the name of my book was called, From Broken To Reborn.”  I was sitting on the phone with my mouth open. She continued to tell me, I would be writing several books and gave me the name for 3 books. Well, let’s say I’ve almost fulfilled my project.

PWH: What message do you hope readers gain from your book?

YC: I would like readers to gain insight into just how much childhood trauma, abuse, and addiction couldn’t impact, distrust, and destroy your self worth, your career goals, and family relationships. The main purpose of my book was to disclosed the traumatic events and to shine the light on how I became addicted to drugs. I wanted individuals to see everyone using drugs is not “junkies” but maybe a product of some suffering that may have been afflicted by someone or something. Just don’t judge a book by its cover before you had a chance to know the story! I feel this is my message.

Yes, I do. I have a few projects coming up. One, I’ll be releasing my second book called “Road To Recovery: Predestined for a purpose” which discusses the process of healing and recovery. It is scheduled to be on Amazon the second week in August. I’m currently working on book three, called “Transparency: The Naked Truth” which will discuss church hurt, infidelity, and other struggles individuals have in the church but are hidden because no one wants to talk about it. I call it, “Silent Sufferers!”

My husband and I will be releasing our new Podcast called L.I.F.E. Living In Freedom Podcast every Saturday beginning at 7 PM streaming on Anchor.com, and other platforms like Spotify, Breaker, Google Podcast, & RadioPublic.