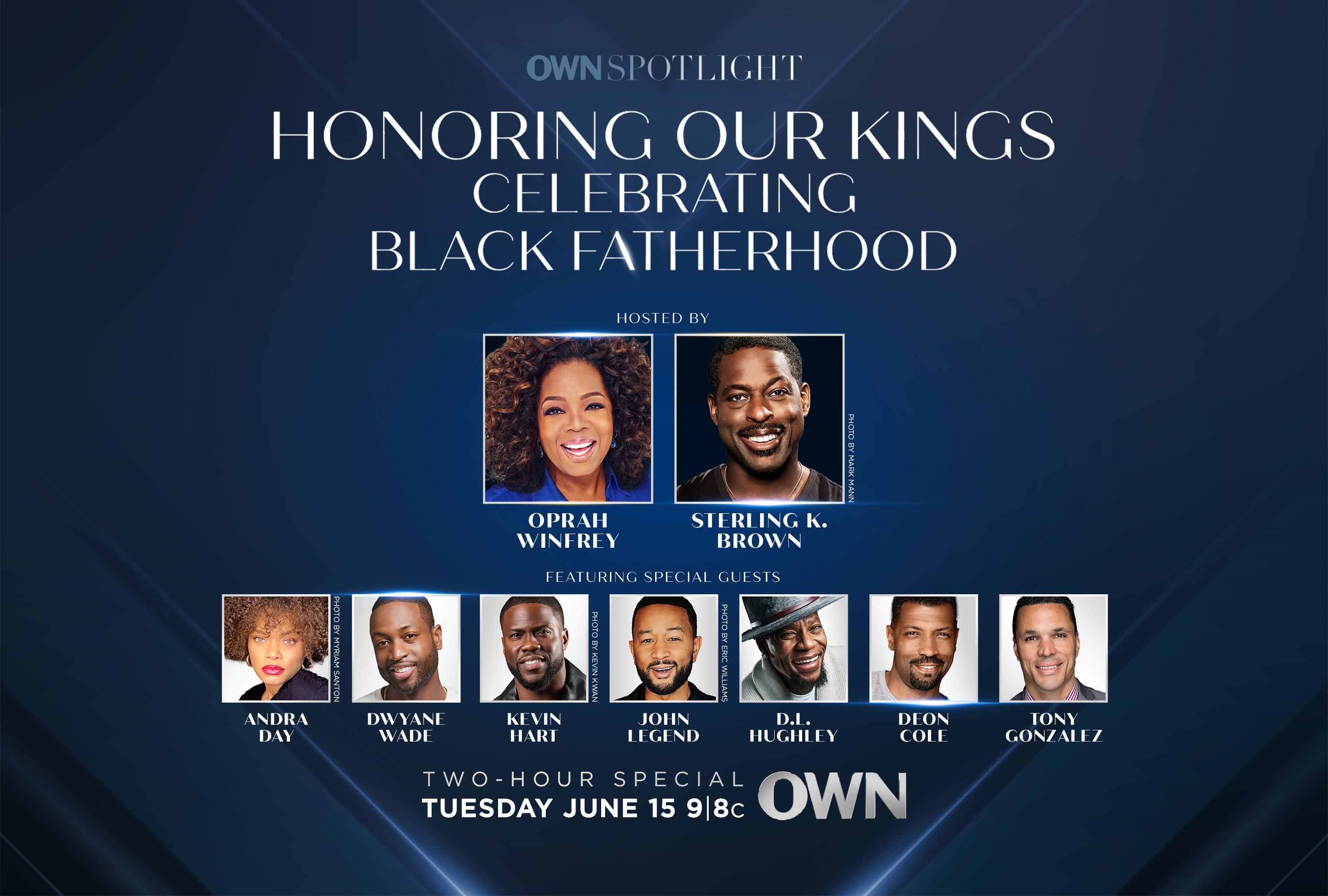 Father’s Day is coming and what better way to celebrate it than by honoring Black Fatherhood with a multi-day event that will share conversations and advice from fathers of various walks of life. Honoring Our Kings: Celebrating Black Fatherhood” Two-Hour Special Premiering Tuesday, June 15 at 9 p.m. ET/PT and Honoring Our Kings: A Black Dad Conversation’ Premieres Saturday, June 19 at 8pm ET/PT on OWN.

“Honoring Our Kings: Celebrating Black Fatherhood”Premieres: Tuesday, June 15 at 9 pm ET/PT on OWN and available on discovery+Description: Hosted by Oprah Winfrey and award-winning actor and producer Sterling K. Brown (This Is Us), the two-hour OWN Spotlight features conversations with everyday dads, a special message from actor and Emmy nominated producer Kevin Hart (Fatherhood), an appearance by three-time NBA Champion Dwyane Wade (Miami Heat) and a musical performance by award-winning artist Andra Day (The United States vs. Billie Holiday) to celebrate Black fathers everywhere.

“Honoring Our Kings: A Black Dad Conversation” airs Saturday, June 19 at 8 pm ET/PT on OWN and available on discovery+Description: OWN Honors Our Kings with a Black Dad celebrity conversation hosted by Emmy award-winner Sterling K. Brown, who sits down to discuss the joys and challenges of Black fatherhood with John Legend, D.L. Hughley, Tony Gonzalez, and Deon Cole. These specials are produced by Hudlin Entertainment and The Gurin Company. Executive produced by Reginald Hudlin, Byron Phillips, Phil Gurin, Oprah Winfrey, Sterling K. Brown and Tara Montgomery.

About “OWN Spotlight” “OWN Spotlight” presentations tackle issues and concerns facing Black lives. The programs feature candid and in-depth conversations that create real dialogue to inspire systematic change. Previous programs include a conversation with award-winning actress Viola Davis; a conversation with singer/actress Andra Day; a special presentation on Ava DuVernay’s short film “August 28;” an inspirational special celebrating Black Fatherhood and the special bonds they have with their children “They Call Me Dad;” a two-night special “Where Do We Go From Here?” that simulcast across the Discovery family of networks featuring Oprah and Black thought leaders discussing the current state of racism in America; “Oprah and 100 Black Fathers” sharing the urgency of having “the talk” with their children and the dreams they have for the future of their families; “COVID-19: The Deadly Impact on Black America” that investigated the disproportionate impact of the coronavirus pandemic on Black communities; “Oprah At Home with Lupita Nyong’o and Cynthia Erivo,” which examined colorism in Hollywood; “Oprah and Alicia Keys – The Interview” discussing Alicia Keys’ new memoir “More Myself;” “When They See Us Now” featuring Oprah in conversation with award-winning filmmaker Ava DuVernay and the cast from the acclaimed series “When They See Us” along with real men formerly known as the Central Park Five; “(In)Visible Portraits,” which was a powerful celebration of Black women sharing their stories of struggle, resilience and beyond; “Black Women OWN The Conversation – 2020 In Review” featured intimate conversations about important issues with honest opinions and surprising solutions that put people first; and the follow-up documentary from D. Channsin Berry “Dark Girls 2” exploring the prejudices darker-skinned women face around the world.

About OWN: Oprah Winfrey NetworkOWN: Oprah Winfrey Network is the first and only network named for, and inspired by, a single iconic leader. Oprah Winfrey’s heart and creative instincts inform the brand and the magnetism of the channel. OWN is a leading destination for premium scripted and unscripted programming from today’s most innovative storytellers. OWN connects with its audience wherever they are, inspiring conversation among a global community of like-minded viewers on social media and beyond. Launched on January 1, 2011, OWN is a joint venture between Harpo, Inc. and Discovery, Inc. The venture also includes award-winning digital platform Oprah.com. Access OWN anytime on http://WatchOWN.tv or across mobile devices and connected TVs.