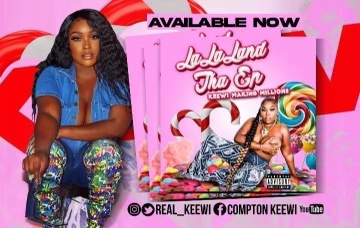 Inspired by her mother who wrote music she begin making a mark for herself by entering in too music contests to show off her lyrical skills starting at the age of 13.

Her passion for her craft led to her being the opening act for mainstream artists such as Trina, Yo Gotti, and Money Bagg Yo just to name a few.

Not stopping at music this ambitious artist Keewi has launched into other avenues including fashion, as she most recently rocked the runway for LA Fashion Fest 2021 at The Globe Theater. She made her debut with a look where hip hop met fashion – black net stockings and a printed leotard – as she performed her newest single “ Undefeated “.

Early in the summer on June 26, 2021, Keewi Making Millions released her ep “ LaLa Land “ during BET Weekend. This album projects her versatility and shows her creativity with songs like “Big Big Drip“ and “Undefeated “. LaLa Land The EP is available on all streaming platforms.