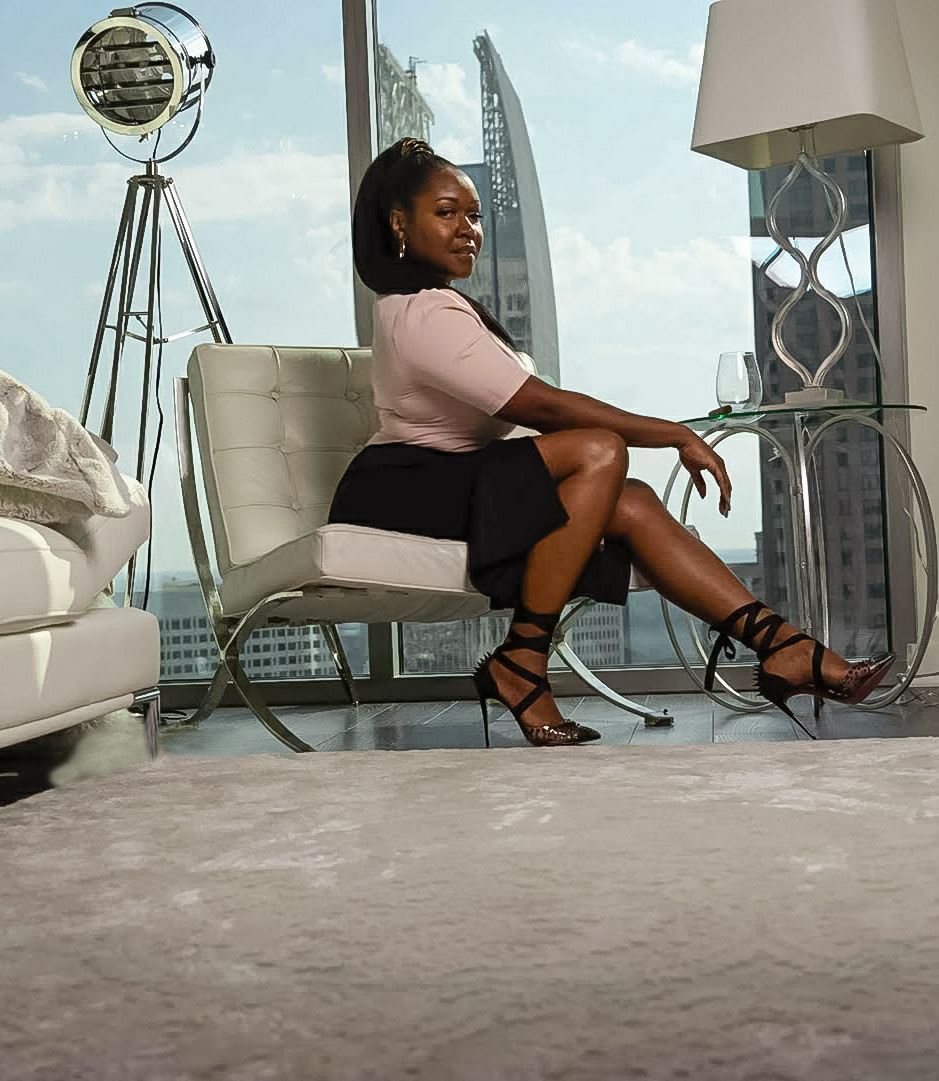 Darnika “Nika” Platt is a lifelong entrepreneur and Atlanta tastemaker. As a 35-year-old businesswoman, she manages her life as a business owner, wife, mother, pet owner, and socialite.

Nika considers herself to be a small-town girl with big city goals. She was born in Benton Harbor, Michigan, and raised in Grand Rapids, Michigan. She left for Atlanta, Georgia in 2004 to expand her life in a new market.

A tax preparer since high school, Nika learned how to do taxes and run a business from her parents and grandparents, who not only owned a tax services business but also a flower shop. She was able to take what she learned from her family and her time at Grand Rapids Community College to begin her own entrepreneurial journey. After leaving Grand Rapids and moving to Atlanta, she built a tax services business, with clients that still use her services today.

While in Atlanta, Nika was not only able to successfully expand her life as an entrepreneur but she also met her husband of six years with whom she shares two children. The couple would go on to build a logistics company together. In addition to that, they also built Future Leaders In Training which is a non-profit business that is designed for at-risk youth.

During her regularly scheduled visits to the nail salon and day spas, Nika began to converse with some of the men who also frequented the same establishments. These conversations made her realize that men don’t have access to the same facilities that women have, including a one-stop-shop for self-care.

Combining her love for pampering herself with her deep interest in self-care for the mind, body, and soul, she began visualizing the concept of a mancave, which is synonymous with a male-driven space where guys can relax.

In 2017, Nika began the process of building out her vision for what is now known as ManCave Atlanta. ManCave Atlanta was inspired by the television show “Cheers,” where everyone knows your name, and is an upscale men’s spa and event facility located in the Lindbergh neighborhood of Atlanta’s luxurious Buckhead District.

The physical build-out was completed within a year. Among other features, the facility houses multiple suites, including:

Nika’s vision is now a reality, one that has amazed every person who has entered the space. Making her the woman who knows exactly what males want and need.

We had the pleasure of catching back up with Nika to discuss more about Man Cave Atlanta, and what’s next for her future in entrepreneurship.

Nika you are truly a genius when it comes to the spa game. Man Cave Atlanta opened in December 2020, during a pandemic and it was genius to do so. What exactly is Man Cave Atlanta?

ManCave Atlanta is an upscale men’s spa that offers massage, manicure, pedicure, esthetician, and barber services. We also have a business and sports lounge for members to work or relax while viewing television and partaking in food and beverages. Additionally, there’s a cigar lounge.
Honestly, it’s full-service facility for men to relax and enjoy themselves. I wanted to provide self-care services for men but my research showed me that they wanted so much more. So, if I wanted to be successful, I had to deliver.

Man Cave Atlanta did not happen overnight. It took about three years to come to fruition. What advice do you have for entrepreneurs who feel like everything has to happen now?

I would say that to take your time and do your research. I’m was an entrepreneur before Man Cave Atlanta but I had no idea about the spa services industry and also I’m a woman so what do I know about what men want and how to market to them. But I did my research, a lot of research. Also, it’s important to make sure that you can secure the capital before moving forward. Our facility looks like it costed a lot of money and it did. No corners were cut, and I went through a lot to get the facility to the standard it is today.

We all have something we pride ourselves in as entrepreneurs. What’s your favorite service offered at Man Cave Atlanta and why?

I love the manicure and pedicure services. That’s the best part about owning a spa, I don’t have to go anywhere else unless I really want a design. But if I need just a basic clear coat or a solid color, I can bring it in for our nail techs to apply.

You and your husband are truly couple goals as you build your family legacy. The non-profit, Future Leaders in Training , definitely caught my eye. Let our readers know more about that and how they can help.

We’ve been blessed enough to both be our own bosses and accumulate a lot of money separately, so it’s only right that we give back to the next generation. So, Future Leaders in Training takes all of the lessons that we’ve learned in business and provides training to youth so they don’t make the same mistakes that us or other entrepreneurs have made.

As a wife, mother and entrepreneur what gems can you drop to help others with the same responsibilities to assist them with juggling everything?

Don’t be hard on yourself. There’s no such thing as the perfect balance. As a mother and a business owner I have a responsibility to both my child and my business. Some days I chose my child over my business, other days my child might have to wait because momma has to handle business. I do my best, but I know at times I may make the wrong choice or I might miss out on something.

However, at the end of the day my daughter is well taken care and knows that I love her. Also, she knows that majority of the time I’m at all of her basketball games and I’m there to pick her up from every practice.

What does a typical day look like for you?

That’s a very hard question, because I don’t have typical days. Most days I’m in Man Cave Atlanta doing some type of administrative work or checking in on everything. I don’t check just emails or watch my staff work, I greet guests, handle party requests, I can be on the phone with the city, and you might even catch me sweeping the floor.
I’m also in the process of building out a new location so everyday is different with that. And then, I have to make sure that I know which days my daughter has practice or which days she has a game. Thank goodness for great staff because I know I couldn’t do it all by myself.

How do you practice your own self-care as you make sure everyone else is good?

I am the self-care queen. That’s how I got into the spa/self-care business. I always make sure I pamper myself with spas, manicures, pedicures, massages, and facials. If it involves self-care I’m there. So actually, I was able to turn my passion for self-care into a business. And it’s unique because it caters to men. But men and women are welcome to enjoy our spa services.

Lastly, as a serial entrepreneur you’re never done with visions. What’s the next vision in the making for you?

We’re working on a new location in Atlanta, but I can’t give a way any details just yet. We’re keeping it mostly a secret but we’re further along than most people would think. That’s all I’m saying.

Connect with Darnika Platt and The Man Cave Spa following them on social media Instagram.com/themancaveatlanta