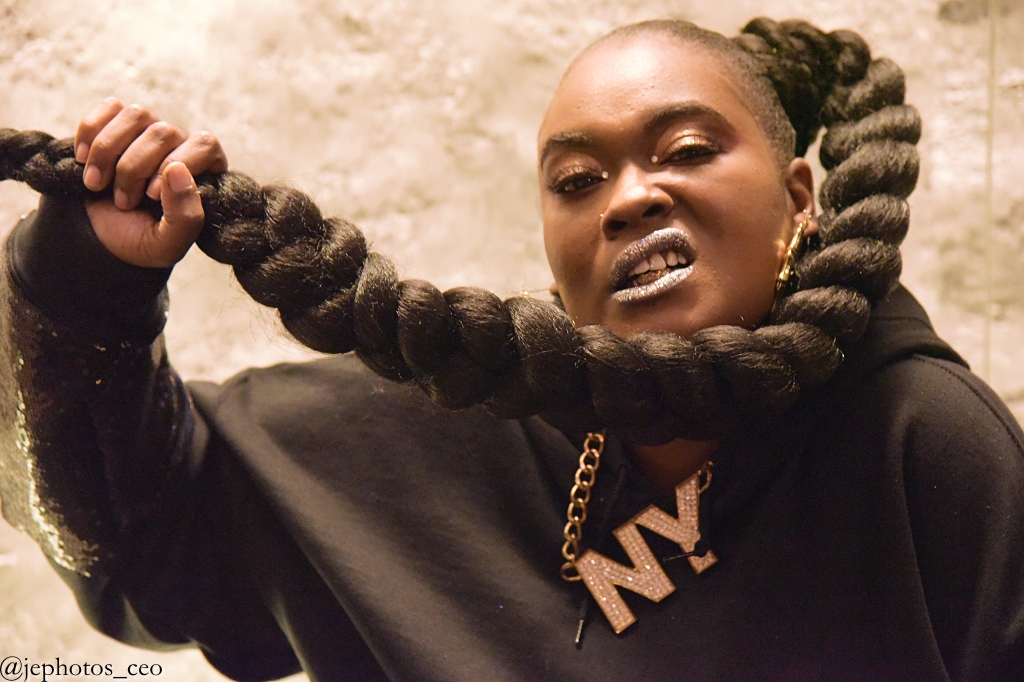 Tiffany (Da Capital Gp aka Gp Da Boss Lady) Shields is born and raised in Harlem New York City, better known as her stage name Da Capital Gp but the industry call her Boss Lady. She has been in this game since a kid so she is not any new Artist to this Male Industry. GP has honed her skills as a Mc, Producer, Videographer, Editor, Co-Director, Co-Producer over the years and by her being an entrepreneur of her own entertainment companies BossPowerRecords/DirtyNYTv/Dirty NY Productions she has been working non-stop. This

entertainer/entrepreneur is not like other artist’s because of her energy and the vibe she brings when she on rock every stage. She is a natural born entertainer who loves to entertain people every since she started singing and dancing at the age of 8 years old. She grew up listen to all types of music from old school R&B funk to hip- hop music and even Rock N Roll. By her having big influences such as Prince, Michael & Janet Jackson, Temptations, Al Green, Smokey Robeson, The Manhattans, NWA, Big Daddy Kane, KRS 1, Mc Lyte, 2Pac, Q-tip, Dmx, Eve, Jay-Z, TI, Missy Elliot, Da Brat and many other talented artist’s in the 80’s to 90’s and even early 2000’s that had gave her the inspiration to move forward into her music career plus Big Daddy Cane & Mc Lyte had gave her great advice at the age of 10 years old “Never Give Up”. So at the age of 12 she started making her R&B songs into hip-hop music when she use to rap over old school beats and having a her mentor, music teacher Mr. Alvin Pazant who was a part of legend 70’ Rhythm & Blues/Soul & Funk Group “The Manhattans” in elementary school PS 144. As an Artist she did not stop she has performed at different places such as The Den, The Pyramid, The Jazz Club, Santos Party House, Karma Lounge, SOB’s, BlackThorn 51, The Shrine, HarlemKnight and much more underground weekly showcases plus fashion shows started in 2015.

Gp has proven herself to be a true survival in this Rap Game and through un- orthodoxed in style, this feminine but hardcore has been called the female “Ol Dirty Bastard” and many others Icons combining real life situations into her songs. As she always say “Music Is My Therapy” Da Capital Gp already drop her first mix-tape project online in 2010 Harlem -knight stars Vol.1 and Vol. 2 in 2011 and now just drop Harlemknight Starz Vol.3 in 2018 on Audiomack, Soundcloud and Mixtapefactory with singles “Body Em” & “Slay”. Also she is now working on her first album Shorty From 7th Da Ep coming soon but drop her 1st single “Holla Back” now on ITunes, Tidal, Amazon and much more in digital stores and Video on Youtube!!

Now working on released her 2nd single “George Jefferson”. She is 1 of hardest working female in this business and she is not thinking about stopping no time soon.

Da Capital Gp is an interesting stage name. How did that name come about?

Wowww make a long story short on this, it started off as GP (Ghetto Princess) which that was my dance battle name when I was a kid plus my brother always call me ghetto as a kid and I’m forever will be daddy’s girl so at the age of 18 I want to trademark my name but someone already had it. Since I am an big Dipset fan and Jim Jones always say Capo I just created Da Capital and then added Gp so there you go Da Capital Gp was born!!!

As a female artist in a male dominated platform, how do you manage to stay above the game?

I just do me honestly!!! Especially because I do mostly everything that the males do anyway!!

What motivates you everyday to get up and take on the music industry?

GOD and my two beautiful daughters as well as my love and passion for the music!!

How would you describe a typical day in your life?

Since I am a single mother it’s hard for me plus I have chronic pain disease called “Fibromyalgia” so yes it’s extra hard for me but I ask God everyday to give me the strength and power that I need to grind hard everyday to make something happen from me writing & recording. I direct/film/edit videos projects for myself or my team or my clients. I am creating my own tv show and looking for Artist for the show, making beats whenever i’m in the mood, creating promotional flyers and promoting & networking with different people everyday.

How did it feel to hear your music on the radio?

It feels so amazing!!

All of them because they all gave me some type of inspiration to my life so I wish that I could work with all of them.

With Out Dj Drop

With Out Dj Drop